Hi everyone! Here’s a few videos from our Children’s Ministry!

Hi Everyone! This is to announce that we will begin authenticating some of the people who have registered for the website. At the moment, the rollout will be in limited batches but you can expect a full rollout soon. You should receive an email once you have been authenticated, be sure to contact us if you experience any bugs. 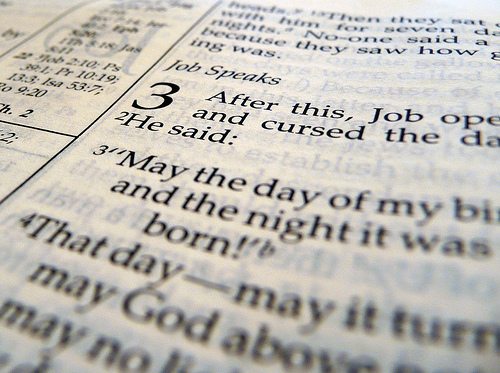 Job and the Retributive Principle

I’ve always loved the wisdom literature, which is why I am currently specializing in Old Testament theology. One wisdom book, in particular, has always held great interest: Job. Job is set long before the advent of national Israel and asks the biggest philosophical question of the Ancient Near East. The ancients believed in the retributive principle: when you are righteous God rewards you and when you are wicked God punishes, so the question of “why do bad things happen to seemingly righteous people” was a considerable one.

God convened his divine council, of which a member of the council played the role of the satan. In this role, the satan pointed out that Job would not love God if God were not protective of Job. God accepted this challenge and calamity befell Job as he lost his family and eventually his health. It was then that his three friends and their younger associate came to comfort Job and in the process produced the exquisite poetic discourses we possess today. Yet for all their combined wisdom, they were stuck debating whether God is just or whether Job had sinned against God. All the while they failed to stop and ask whether the retributive principle was true!

From our vantage point, we can see that God remained just while Job remained righteous and that the two are not linked in the least. During my time as a pastor and later as a missionary, I would regularly experience calamity befalling people who by all accounts would appear as righteous as any Christian possibly could. I recall one of our most promising national workers being crushed between two buses right outside our missionary headquarters. It seemed incredibly senseless that such a gifted minister and good Christian died. Even today there is a part of us that wants to ask “was it God or was it the person” when we witness such tragedies, all the while forgetting to question the validity of the retributive principle.

In the New Testament, Jesus was again confronted by the retributive principle when he was asked: “who sinned, this man or his parents that he should be born blind?” Jesus responded “Neither this man sinned nor his parents, but it happened so that the works of God could be revealed in him,” because their question, just as Job and his friends had asked, was fundamentally wrong. Jesus went further to flip the retributive principle entirely upon its head in Matthew 5:10-12:

Blessed are those who are persecuted because of righteousness, because theirs is the kingdom of heaven. Blessed are you when they insult you and persecute you and say all kinds of evil things against you, lying on account of me. Rejoice and be glad, because your reward is great in heaven, for in the same way they persecuted the prophets before you.

Last week Hope Presbyterian Church held a series of Children’s performances put on by our children’s ministry. In case you missed it, or just want an encore here’s a link to the video.

One thing I ask…

At a recent Breakthrough Weekend I attended, the lyrics of the above song taken from Psalm 84:10a was sung.  Verse 10b continues as follows: “I would rather be a doorkeeper in the house of my God than dwell in the tents of the wicked.”

These lines reminded me of King David’s request in Psalm 27:4: “One thing I ask of the Lord, this is what I seek: that I may dwell in the house of the Lord all the days of my life, to gaze upon the beauty of the Lord and to seek him in his temple.”

The one thing that King David asked was also what he sought.  “To dwell in the House of the Lord so that he could gaze upon his beauty and seek him in his temple.”  ‘House of the Lord’ and ‘temple’ could be interpreted as ‘the courts of the Lord’.  In a nutshell, King David desires to be in God’s court where his glory dwells, to be in his presence, to spend time to commune and fellowship with him, to know his Lord in an intimate manner, as well as his will and heartbeat.

Psalm 84:1-2, 4 declares that ‘the dwelling place of the Lord is lovely, and the psalmist yearns, even faints for the courts of the Lord.’  It describes a heart longing and desiring God, where nothing on earth satisfies other than the pleasure of being in his presence, discovering who he is, loving him, understanding him and having a greater knowledge of him.

Reflecting the past year, I asked myself where I have spent my time.  In the courts of the Lord?  Elsewhere?  In the tents of the wicked?  I must say not as much in the courts of the Lord as I would love to.  My prayer this year is to ask God to instill in me a continual desire and longing to spend time with him in his courts.  To tell him when all is said and done – “Lord, you are all I want.”

This desire requires me to intentionally set aside time to be with him, to read and meditate on his word, to share with him my deepest thoughts, concerns, anxieties, happy & sad moments and to pray in his presence.  Concentrate on just being with him, the lover of my soul.  Wait silently and patiently on him to speak.  Daily protection of this time is of utmost importance to ensure that nothing distracts, deters or causes me to miss this precious time being with him.

Having such moments is a blessing.  The Bible promises that our life journeys will be strengthen as we pursue him daily and draw near to him.  We will grow from strength to strength as we know God and who he is – his character, his heartbeat, what he likes and hates, his will and desire for us.  Knowing him helps us to change our perspectives in life, to better able to handle and cope with life’s obstacles and difficulties, to walk more in his ways and to live transformed lives bearing attitude and action fruits.  And in the day of trouble, he promises to keep us safe in his dwelling; he will hide us in the shelter of his tabernacle and set us high upon a rock.

‘Indeed better is one day in your courts than thousands elsewhere.’  If you have neglected him and spent your time elsewhere, he is calling you TODAY… “RETURN, COME and DRAW NEAR to me and be found in my courts.”  Will you?